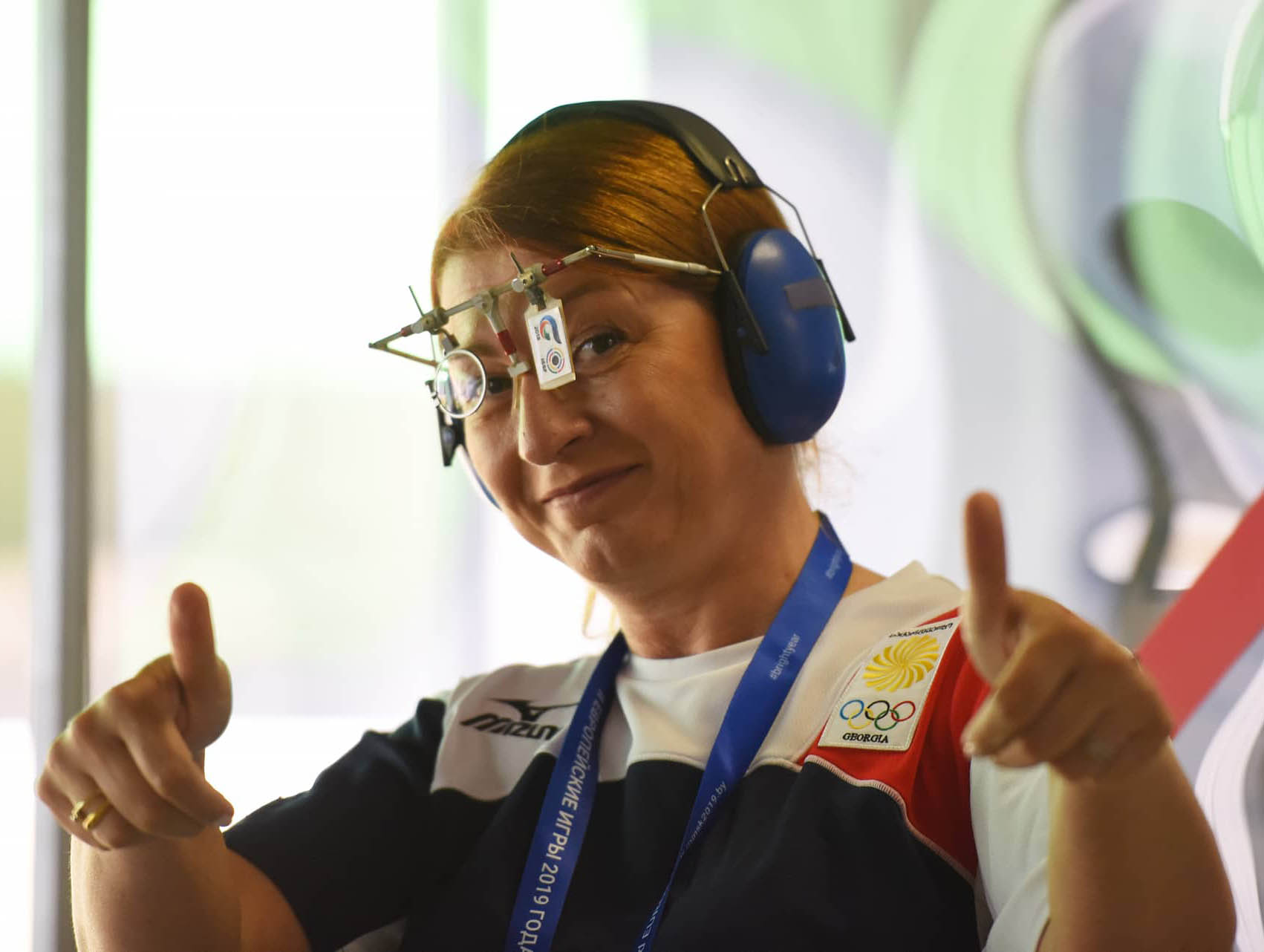 By any definition, Georgia’s Nino Salukvadze is in a league of her own.

The 51-year-old shooter and Vice President of the Georgian NOC is a triple Olympic medalist (including gold at Seoul 1988), a six-time World Champion, and a four-time European Champion.

In fact, according to the International Shooting Sports Federation (ISSF), she’s claimed no fewer than 35 gold, 25 silver and 26 bronze medals during her glittering career.

She’s also qualified for more Olympic Games (nine) than any woman on the planet and will set the record for most appearances at the Games next summer in Tokyo.

If that’s not enough, in 2016 she and her then 18-year-old son Tsotne Machavariani became the first mother and son to qualify for the same edition of the Olympic Games. They also competed together at the European Games Baku 2015 and Minsk 2019 (where they won bronze), and are aiming to repeat the feat in Tokyo next summer should Machavariani make the grade.

We recently caught up with Salukvadze as she prepares for her record-breaking Olympic appearance in Tokyo, asking her about life under lockdown, last year’s European Games in Minsk and much more.

How have you adapted to the restrictions that have been in place in your country?

Honestly, it was the first time in the last 35 years that I had such a long rest. The whole world was in this situation and we, the athletes, had to stay at home because I think health is important for everyone. Of course, each day spent without training has a negative impact, as getting back into peak shape physically as an elite athlete is a complex task requiring much energy. So I stayed at home with my son trying to define priorities and set up specific actions. First of all, we started to improve our exercises, focusing primarily on physical training in order to avoid a double load when we move back to our usual regime.

However, we had the privilege of having air pistols at home, those we trained with for the Olympic Games and qualification tournaments. A stable hand is rather important for us and we should not lose it. Going without training for 2-3 months is a catastrophe. It means starting from the bottom.

I have been in this sport for 35 to 40 years and never had such a long interval away from the sport. It was like the train abruptly stopped. The calendar was full before and after the Olympics, but we stopped having competitions, there was no training, so we had to use this spare time efficiently.

Have you found new, innovative ways to train? If so, can you tell us what they are?

The major innovation during this period was loading myself mostly with physical exercises, which I defined together with my son. We have to prepare for future qualification events, which we hope will be restored next year. This is the year of Olympic Games and I strongly believe that I will have the pleasure again to take part for the 9th time in this great festive event representing my country. [Salukvadze qualified for Tokyo 2020 after finishing 5th at the Rifle/Pistol World Cup in Beijing in 2019].

During the pandemic period, the key innovation was to double the physical exercises to stay strong both physically and psychologically. If we are strong physically, we will be able to handle the challenges psychologically. I hope in two to three weeks, the training process will be renewed and we will move to an active regime. Each missed day without training is vital for athletes and requires much vigor.

What is the key lesson you have learned from life under COVID-19 that you will bring forward once things return to normal?

What’s noteworthy is that we could spend more time with our family, parents, simply people around us learning how important it is to stay close to them. Every moment we were rushing somewhere and had no time for them. So I learnt that communication is very important.

My parents were missing me a lot, as I am always traveling with my son – this is sport life. My father is 89 years old and mum is 81. They were so happy and energetic seeing me. I shared with them all my love, care and attention. I saw the ray of happiness on their faces having me beside them and they looked so strong and energetic at their age.

I have lots of friends abroad. I used this spare time to contact them on the phone trying to offer my help if they needed anything. I got in touch online with all my friends around the world. It gave me great positive feelings to communicate with them.

I am going to continue the same way after we exit from lockdown. I will definitely find more time for my parents, family and friends just to hug them and show how I care about them. The major lesson learnt is that our relationships, communication means a lot. No one knows what will happen in the future, life is short, so we need to share with each other our love and care.

What is the biggest challenge for you, having already qualified for Tokyo 2020, now that the Games have been postponed until 2021?

Actually, it was rather complicated to stop all the activities on our busy calendar. Each day, hour and minute was preplanned. But health is the most important thing. I believe we will overcome this challenge together with the entire world. I wish that everyone, all the athletes around the globe, stays strong and healthy. We have to cope with this challenge.

The European Games in Minsk last year were a success for you. Tell us about your experience there and how valuable it was to you as you prepare for Tokyo 2020.

I won the bronze medal together with my son at the Minsk European Games in the mixed tournament … Being successful at the European Games was a great stimulus for me and it is always important to enrich your experience.