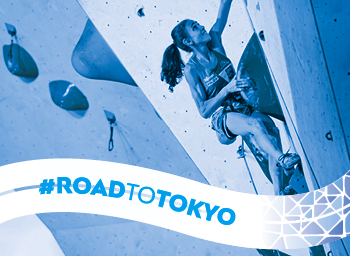 At age 20, Italy’s Laura Rogora is already one of the most accomplished climbers in the world.

And in 2019, Rogora qualified for the Olympic Games Tokyo 2020, joining an exclusive group of only 40 climbers worldwide who can call themselves Olympians, with Sport Climbing preparing to make its Olympic Debut this 3-6 August in Tokyo.

Having first made a name for herself outside of the IFSC circuit, Rogora is now turning heads in competitive climbing as well. Her rock climbing has been put on hold the past few months as she focuses solely on preparations for Tokyo 2020, where she says her aim is to reach the finals.

The Rome native appears well on track to accomplish that goal, having this month won the Lead World Cup in Chamonix, France and taken silver in Villars, Switzerland, finishing just behind the woman who poses the biggest challenge to all climbers in Tokyo: Slovenian superstar Janja Garnbret.

Rogora booked her ticket to the Games in November 2019 after finishing 8th in a Combined Qualifier event in Toulouse, France. She was 18 at the time and had only joined the senior tour two years earlier.

“When it happened, I couldn’t quite believe it,” she says. “Of course, I started off 2019 with the goal of qualifying for the Olympics but I always felt like it was a dream rather than a real possibility. In Toulouse I didn’t start as a favourite so I really didn’t expect to be able to get my ticket for Tokyo on the occasion. When things went well, this surely gave me a great boost for my training from there onwards.”

Rogora makes the transition between rock and sport climbing look effortless, although she admits that it’s a lot trickier than it seems from a mental standpoint.

“I believe that when you’re in good form during a competition, it is easy enough to switch to the outdoor endeavours [but] I don’t think it works as well the other way around because during competitions your head and your state of mind counts a lot.”

Having only won three medals to date at senior IFSC events, Rogora knows there is still work to do to ensure regular appearances on the podium. She says she is currently focusing on improving her self-described weaknesses: expressive force, coordination and jumps.

Her exploits in rock climbing have brought her international fame, but a humble Rogora says that even though the spotlight may be on her at Tokyo 2020, the expectations are not weighing on her.

“I don’t feel much pressure because I know that rock climbing is much different from actual competitions,” she says. “I feel that there are a lot of female athletes that could be as good or even better than me on rock if they would dedicate more time to it.”

She is excited to get the competition started in Tokyo and, despite the absence of spectators due to the COVID-19 pandemic, is looking forward to the Games providing her sport a massive shot in the arm.

“The fact that climbing is making its debut at the Olympics is a great thing for our sport,” she says. “The Olympics will be a great stage to make our sport more known to the general public. Up until today, climbing was more of a niche sport and I think that we are already seeing some consequences of it becoming an Olympic sport as more people are getting involved and interested in the movement.”

Sport Climbing is definitely on the rise globally. In addition to being included on the Olympic Games programme, it has also been added to the Asian Games, Pan American Games and, most recently, the European Games. The sport will make its European Games debut at the third edition slated for Krakow and Malopolska, Poland, in 2023.

The young Italian says appearing at the European Games in two years would “be one of my objectives for sure” as long as she is still competing at a high level.

But first things first:  The women’s Olympic competition begins on 4 August with combined qualifying in Speed, Bouldering and Lead. The finals are scheduled for 6 August. All the action will take place at the Aomi Urban Sports Park.

We wish Laura all the best!