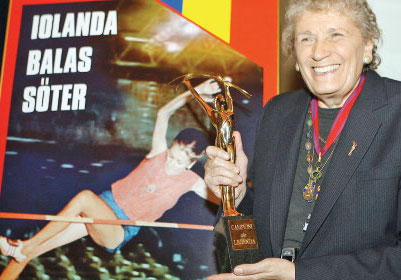 This high jump legend and outstanding personality of Romanian sport was born in Romania, in Timisoara on December 12, 1936. In her own country in 1956 she took the first of her 14 world records and then improved it from 1.75 to 1.91 in 1961, again in Bucharest. Her record has remained unbeaten for 10 years.

Among her many sporting performances must be remembered the 19 national champion titles won – 16 seniors and 13 juniors, 63 records downed – 41 senior and 22 junior and 41 selections in the Romanian athletics team.
Iolanda Balas also twice climbed the Olympic podium, in Rome 1960 and Tokyo1964.

After retiring from competition in 1967, Bala? married her former coach János S?tér, and taught physical education in Bucharest. In 1990 she was elected President of the Romanian Athletic Federation, a post she held until 2005.

In 2000 she was nominated among the top 10 athletes of the twentieth century.
Iolanda Balas in 2010 received a royal decoration “Nihil Sine Deo” from His Majesty King Michael I of Romania.

Alin Petrache, Romanian Olympic and Sports Committee chairman, said: “We have lost today a benchmark of Romanian sports and Olympism, but I stubbornly believe that we have not lost it completely. Iolanda Balas is the model that embraces a discipline in which she made history, whose athletes will always be dedicated to exceeding their benchmark standards, passionate and proud to represent Romania on the highest step of the podium.”
He added: “ Iolanda Balas was a complete athlete, a refined lady and an efficient manager. God rest her soul in peace”.

The EOC express their condolences to her family and Romanian sport