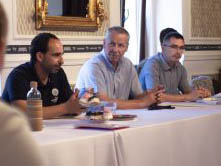 3,600 athletes aged 14-18 from 50 European countries are expected to take part from 24 to 30 July 2022 in the Summer EYOF, which has been brought forward from next summer to avoid a clash with the rescheduled Olympic Games Tokyo 2020.

According to Brüll, the extra year will help the organisation of the multi-sport event, as the organisers will have additional time to better prepare the sports facilities and accommodation. “The postponement of the event has not significantly affected the activities of the organising committee. It is good that they continue to meet and work. The change of dates is in many aspects more positive than negative,” said Brüll, who will again visit the Slovak city at the end of October along with the Members of the EYOF 2022 Coordination Commission. “The most important thing is to make a good budget, as the preparation period has been extended.”

“Banská Bystrica will be a great host and the city was ready for the EYOF even in 2021. We would not have had to move the event if the Tokyo Olympics had not been moved. In the National Olympic Committees, the same people are now working for both the Olympic Games and the EYOF. The people in Banská Bystrica gained an extra year and the EYOF can be even better,” he added.

A visit of the CoCom was originally scheduled to take place in April but it was postponed due to the COVID-19 pandemic.

President of the EYOF 2022 Organising Committee Ján Nosko, who is the Mayor of Banská Bystrica, and CEO Peter Korčok have stated that the Team is working on a regular basis. At present, the construction of the National Athletic Stadium is significantly advancing, while adjustments of the other sports facilities have progressed, as well as university dormitories are being modernized.

Director of the Economic Activities in Sport Department at Ministry of Education, Science, Research and Sport of the Slovak Republic Pavol Swiec also took part in the joint meeting at the EYOF 2022 headquarters.

There has been quite a lot of interest in organising the EYOF in Europe, since the event was established in 1991, as the biggest youth multisport even in the continent has already been held in 2/3 of the European countries.

According to Brüll, Banská Bystrica has all the suitable requirements to organise such events: “Banská Bystrica is neither too small nor too big city to organise EYOF. In big cities, similar events can be lost, in small ones they can have big problems. The advantage of Banská Bystrica is that it has enough university dormitories so there is the possibility of accommodating young participants in the summer. For instance, many applicants had to withdraw their EYOF candidacy for the EYOF, as accommodating more than 5,000 people in hotels during the summer season is very difficult for many countries.”

The previous EYOF organisers have widely benefited from the event. Cities have become more popular around Europe and their sports facilities and accommodation have developed. The EOC Sports Director says that “the EYOF also has a positive impact on children’s sports and physical activities in the organising cities.”

“After organising the event, the interest of the local community usually increases and people are able to use the modernised sports facilities.”

“There is the same intention in Banská Bystrica. The EOC also wants the city to benefit from the event and I am fully confident that EYOF will leave a great legacy in the city and, above all, the importance of sports and physical activity in the country will be strengthened.”