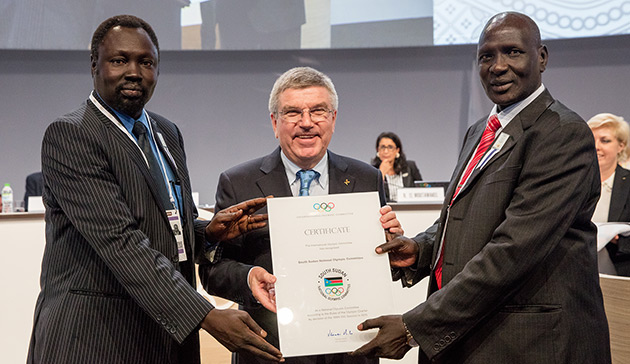 IOC President Thomas Bach personally welcomed the South Sudan NOC, represented by its President Lt. Gen Wilson Deng Kuoirot and its Secretary General Tong Chor Malek Deran, into the Olympic fold and presented them with a certificate of recognition and an Olympic flag.

It has taken some time for the sports structures to be established in South Sudan, which became an independent country on 9 July 2011 and shortly thereafter, a UN Member State on 14 July 2011. At present, it counts seven Olympic sports federations.

The NOC of Sudan was also praised for its key role in facilitating the establishment of a South Sudanese National Olympic Committee.

“We would like to thank the NOC of Sudan who has been a real partner and friend,” stated President Bach. “On behalf of the entire Olympic Movement, I would like to thank you for your great cooperation with your South Sudanese neighbours. It is an example of what sport can do and demonstrates also what autonomy of sport from politics really means because despite political dispute, you have worked together with your friends and neighbours and have made this recognition possible.”

The Opening Ceremony of the Olympic Games in Rio de Janeiro will the first time in history that the South Soudan athletes will march behind their national flag.