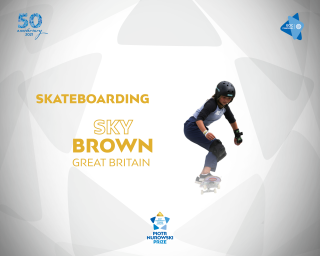 Sky Brown is one of the five finalists for the 2021 Summer Piotr Nurowski “Best European Young Athlete” Prize (PNP).

Born in Miyazaki, Japan in 2008, but competing for Great Britain, Sky is the youngest professional skateboarder in the world.

She has yet to hire herself of a coach, instead relying on YouTube as a resource for learning all her tricks. She made her first competitive appearance in 2016 at the age of 8 at the Vans US Open, making her the youngest athlete to compete at the event.

Sky says she is super happy when skateboarding, which she uses as motivation while practicing.

Her podium finishes began in 2019 with a bronze at the World Championship in São Paulo. She also became the youngest British Olympian ever at age 13 when she competed at the Olympic Games Tokyo 2020, where she won bronze in the park discipline. A month after Tokyo, she won gold in the X Games women’s skateboarding park event.

She claims that her favourite memory so far in her young skateboarding career was taking part in the Olympic Games in Tokyo, where she had the opportunity to compete against her good friends – and even share the podium with them.

She hopes that winning the PNP will increase the visibility of her sport, which made its Olympic debut at Tokyo 2020.

Having been born in Japan to a Japanese mother and British father, Sky speaks fluent Japanese and English. She loves to increase her knowledge by trying new things at every opportunity. One thing Sky isn’t particularly keen about, however, are insects!