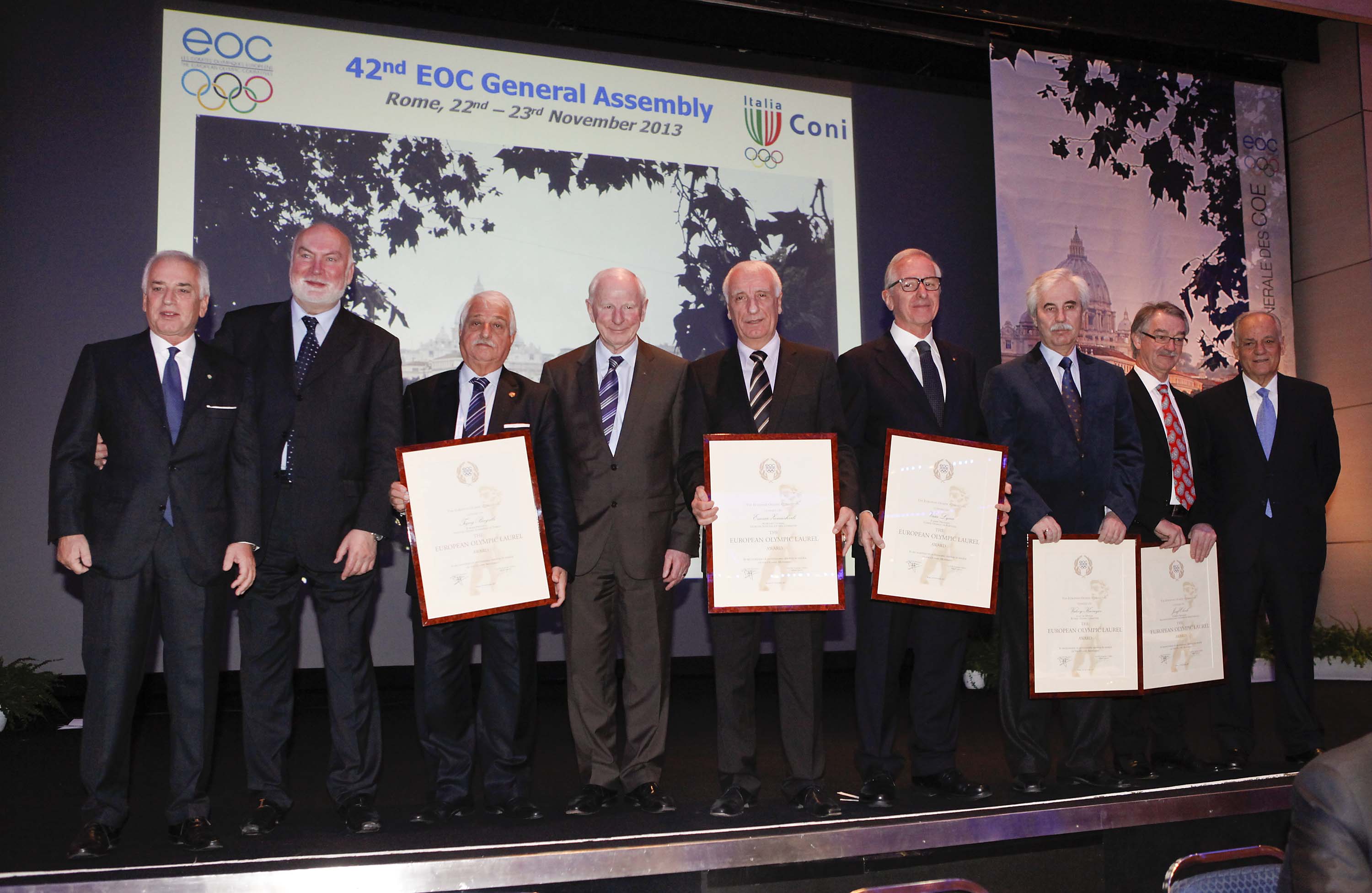 Rome 28th November – As for every year since 2007, the year of their creation, the recent Rome EOC General Assembly was the perfect timing to bestow the European Olympic Laurels to NOCs’ sports leaders from our continent who have distinguished themselves for their merits and their commitment to Sport.

The EOC have awarded the 2013 Laurels to five leaders who earned merit during their career in their Olympic Committee and in their country in general:

Mr. Togay BAYATLI (NOC of Turkey) strongly contributed to the promotion and development of Olympism and sport in Turkey. As the former Secretary General and President of the NOC of Turkey, he has dedicated his time and efforts to spread Olympic Values. A journalist, his career as a sports writer began in 1962. In 1981 in San Paulo, he was elected member of the International Sport Press Association Executive Committee, was elected Vice President in 1985 and then President in 1993. He is currently Honorary President of AIPS. He has been a Member of the EOC Executive Committee for four mandates. He served on the organizing committees of many important sports events and congresses, held in Istanbul since 1978.

Mr. Josef EBERLE (NOC of Liechtenstein) – He has been committed to sport for 50 Years. He started his own sports career as an alpine skier and is now an excellent golf player. As sports official he took a big part in the development of national sport. For the last forty years he has held a lot of important positions in several sport associations and clubs in Liechtenstein. He was also chef de mission at the Games of the Small States of Europe several times. He was the first president of the NOC after the merge in 1992, until 2000. After a short break he became president of the governmental sports commission which is also a very important position from which to strengthen sports in Liechtenstein.

Mr. Valery KUVAYEV (NOC of Russian Federation) – For the last 20 years he has conducted major work on preparations and participation of Russian athletes in the European Youth Olympic Festivals, as head of the department and permanent head of the Russian delegations. In close interaction with the Russian sports federations he raised the prestige and importance of these competitions in the country. he has contributed to the review of the European Youth Olympic festivals Charter and actively participated in the improvement of the organization. At the first summer and winter Youth Olympic Games in Singapore and Innsbruck, Valery Kuvayev successfully led the Russian sports delegations.

Mr. Vasco LYNCE (NOC of Portugal) – A personality of high standing and of remarkable merit for his work in favour of the development of sport in Portugal. Having been Chef de Mission, Secretary General and finally President, he is now one of the five Honorary Members of the National Olympic Committee of Portugal. Mr. Vasco Lynce has also been Secretary of State for Sports, President of the High Sports Council and President of the National Sports Institute.

Mr. Emzar ZENAISHVILI (NOC of Georgia) – The founding member of the Georgian National Olympic Committee (1989). He held the position of GNOC Secretary General from 1989 to 2008 – and was reelected in this position after 2012. During the 2009-2012 period, he was Advisor to the NOC President. He was Member of two EOC Commissions under the Jacques Rogge’s Presidency. he was at different times elected to leading positions at the National Federations of tennis, chess, handball, football and at the Georgian Sports Writers Association. He was one of the leaders of Georgian Olympic delegations at the past six summer and five winter Olympic Games. He has been official delegate for his NOC at various IOC sessions and congresses. He is a Member of AIPS, author and editor of several books and various publications on sport.

Congratulations to them all !