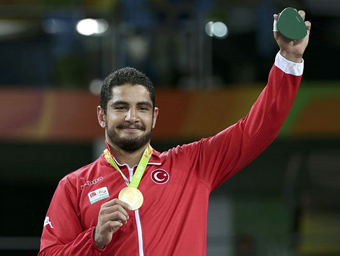 The Turkish Olympic Committee has appointed the Rio 2016 Olympic and two-time world champion wrestler Taha Akgül as the new chair of their Athletes’ Commission. 26-year-old Akgül, who competes in the 125 kg category, will now also serve as Executive Board Member during his four-year term from 2017 to 2021.

The TOC’s Athletes’ Commission is a body of 70 current athletes who have been nominated by their respective National Federations. The TOC is one of the Olympic Committees leading the way in emphasising gender equality, reflected by the even split of 35 male and 35 female members on the Commission.

The purpose of the Athletes’ Commission is to provide Turkish athletes with a platform for dialogue with the TOC, as well as acting as role models to promote the Olympic values among Turkey’s youth and the wider population. It serves as a way for athletes to express their needs, opinions and suggestions to the TOC, and helps them develop and fulfil their potential in sport.

Taha Akgül was born on 22 November 1990 in Sivas, Turkey. He is an Olympic, world and European champion Turkish freestyle wrestler competing in the 125 kg division. In 2014 and 2015 he won the World Championship title in the 125 kg division, and in 2014 he was selected as Best Wrestler of the Year by the Turkish Wrestling Federation. He won a gold medal at the Rio 2016 Olympic Games defeating Iranian wrestler Komeil Ghasemi in the final. He is also a student of physical education and sports at the Karamanoğlu Mehmetbey University in Karaman.

Like all of his colleagues on the European NOC Athletics Commissions, he will be invited to the Athletes’ Forum and the elective assembly of the EOC Athletes’ Commission in Monte Carlo next 20 October.

Reflecting on his appointment, Akgül said:

“I am extremely honoured to be selected as the chair of the Athletes Commission and as a member of the Executive Board. The TOC is an organisation where athletes are the primary focus, and I have been aware of their support to athletes and efforts to spread Olympic spirit and culture in Turkey for many years.

“In my new position, I will be able to take an active role in addressing all the needs and expectations of both young and established athletes, and help them fulfil their amazing potential. This opportunity will allow me to directly contribute to their development and help them represent our country to the best of their ability in international competitions.”

“As an outstanding athlete with an Olympic and two World Championship gold medals, I believe that Taha Akgül will be a great success in the important task of representing and motivating young athletes. Taha will also put significant effort into encouraging National Federations in Turkey to establish an Athletes’ Commission of their own and bring athletes into the decision-making process. Athletes are at the centre of the Olympic Movement and their voices need to be heard. It is great to see the IOC push for greater female representation at the Tokyo 2020 Games, as it is vitally important that in sport, like on the TOC’s Athletes’ Commission, women are given an equal voice and equal opportunity.