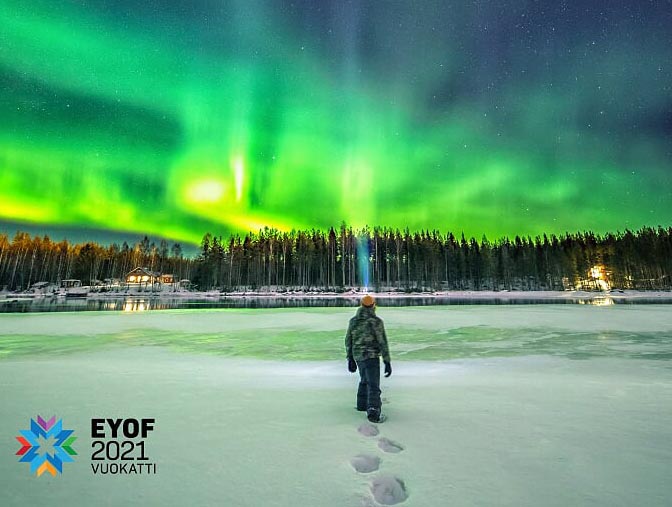 Vuokatti marks one year to go to Winter EYOF 2021

Deep in the heart in the Arctic Lakeland lies the picturesque Finnish ski resort of Vuokatti, which in exactly one year will host its second Winter European Youth Olympic Festival (EYOF) after a 20-year hiatus.

Located 600km north of Helsinki and about 270km south of the Arctic circle, the village of Vuokatti is tailor-made for winter sports and outdoor activities, providing the perfect setting for the estimated 1,000 athletes aged 14 to 18 who will compete here from 07-12 February 2021.

To commemorate the milestone, local organisers announced the name of the Vuokatti 2021 mascot today. “Quukkel” was chosen in an online competition held on Instagram and Facebook. Quukkel is a Siberian Jay native to the region who is said to be kind and brave. The mascot promises to be the focal point for tomfoolery at next year’s EYOF, which will feature seven sports: alpine skiing, biathlon, cross country skiing, figure skating, ice hockey, short track and snowboarding.

“One year from now, all the best European young athletes will gather together to compete in these excellent circumstances here in Vuokatti and in the city of Kajaani,” said Marita Kaipainen, Secretary General of Vuokatti 2021. “The preparations for the Games are proceeding with good cooperation between local, national and international parties. Just last week we hosted a pre-competition alpine skiing event, which gave us a lot of confidence that we are on schedule and on the right track.”

For the first time in winter EYOF history, every sport and event will be gender-balanced thanks to the inclusion of girls’ ice hockey on the sports programme. The pioneering girls’ teams were recently confirmed as the Czech Republic, Finland, Russia, Slovakia, Sweden and Switzerland.

Vuokatti hosted the 5th edition of the Winter EYOF in 2001. For the 15th edition next year, the organisers aim to make it one of the most sustainable in history. This will be reflected in various aspects of the organisation, including policies and materials based on sustainable development and the use of renewable resources. The selection of products and materials for the event minimises the amount of plastic used, for example, in food-related activities.

Each athlete will be presented with a designable drinking bottle and given access to what organisers describe as “the cleanest tap water in the world” in an effort to drastically reduce the amount of plastic used at the event.

In addition, all but one of the venues to be used for Vuokatti 2021 are already existing, thereby significantly minimizing any potential impact on the environment. Only the Vuokatti Arena, currently under construction and already planned before Vuokatti was awarded the EYOF, needs to be built. The arena will host the short-track and figure skating competitions.

The organisers, locals and of course Quukkel are eagerly awaiting the athletes and teams from the 50 National Olympic Committees of Europe next year. See you there!