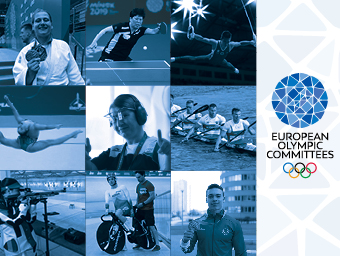 WITH 1 YEAR TO GO, EUROPEAN ATHLETES HUNGRIER THAN EVER TO COMPETE AT TOKYO 2020

Asked to describe how it felt to learn that the Olympic Games Tokyo 2020 had been postponed for a year due to the COVID-19 pandemic, two-time Olympic medallist David Belyavskiy of Russia said: “It was like waiting for a holiday only for it to be cancelled at the last moment.”

The disappointment the artistic gymnast and other athletes across Europe felt earlier this year is understandable. After all, most had trained every day for over three-and-a-half years to be in peak condition this summer.

But Belyavskiy, a five-time European Games medallist, admits that once the initial shock subsided, he began to see the silver lining.

“I realized that I can prepare for the Olympic Games in Tokyo even better now,” he says. “Everything will be fine.”

He is far from alone in this sentiment as the countdown clock for next year’s Games officially hit the one-year-to-go mark today. A surprisingly large number of European athletes who have already qualified for Tokyo 2020 – or are in the process of doing so – say they also see the benefits in gaining an additional year.

“I am not sure I would even call it a challenge per se,” explains Bulgarian rhythmic gymnast Katrin Taseva, who is looking forward to competing in her first Olympic Games next year. “I would say that the postponement of the Olympic Games has been a positive influence for all of us because we can be better prepared as we have more time to work on our routines.”

The rescheduling of the Games couldn’t have come at a better time for Slovak canoe sprinter Erik Vlcek, who broke a leg during a game of football with his teammates earlier this year after they were forced to return home from training camp in the United States as a result of the coronavirus outbreak.

“I have never broken anything before, or had surgery, and even now months after I’m still going through therapy with my leg,” the five-time Olympian says. “For me it was not a straightforward, easy process to adapt to quarantine, but my mindset around all the restrictions is that if it’s not something I can control, I try not to think about it or let it affect me.”

Rather than let the pandemic, the broken leg and the postponement of the Games bring him down, the series of setbacks has only served to make Vlcek hungrier to compete in Tokyo in a year’s time.

“For me just being able to train properly would have been good but I couldn’t do anything for six weeks. I think that time was good for me because the body always needs to rest. It is just as important as training is. With the Olympics postponed until 2021, most people would lose motivation. But those six weeks showed me just how bad I really want to make my sixth Olympics and it lit a fire inside me.”

While it is unlikely that many other athletes have been as unfortunate as Vlcek during lockdown, almost all have nevertheless been inconvenienced by it. And most have been forced to come up with new and innovative ways of training as a result, from working out in their gardens to trying other sports and physical activities just to stay in shape.

For veteran shooter Nino Salukvadze, who is looking to become the first woman to compete in nine editions of the Olympic Games next year, adapting to the new reality of life under lockdown was far from easy.

“I have been in this sport for 35 to 40 years and never had such a long interval away from the sport,” the multiple Olympic medallist and Vice President of the Georgian NOC says. “It was like the train abruptly stopped. The calendar was full before and after the Olympics, but we stopped having competitions, there was no training, so we had to use this spare time efficiently.”

She says the biggest change to her training routine was to double up on her physical exercises while being prohibited from visiting the shooting range. “If we are strong physically, we will be able to handle the challenges psychologically,” she adds.

One athlete who says she has actually benefitted from lockdown is Russian cyclist Anastasiia Voinova, silver medallist at the Olympic Games Rio 2016 and gold medallist at the 2nd European Games Minsk 2019.

“I think that this period of restrictions was rather useful in terms of my professionalism and my mental preparation,” she says. “Because every day you’re connected with your coach only by phone. You have only your training plan on your smartphone screen. So you constantly learn how to feel your body and to limit your activities if necessary,” she says.

Such positivity is perhaps not surprising coming from a woman whose favourite quote is: “I don’t believe in the power of conditions. Those who are successful seek the conditions they need. If they don’t find them, they create them.”

The Olympic Games have always been a symbol of hope, resilience and the power of humanity, but Tokyo 2020 stands poised to become an unprecedented celebration of unity and solidarity next year following the world’s collective hardships battling the pandemic.

One thing is certain: European athletes are once again leading by example and providing us all with much-needed inspiration, and we can’t wait to cheer them on in Tokyo exactly one year from now!

Watch this video to learn more about their inspiring stories.