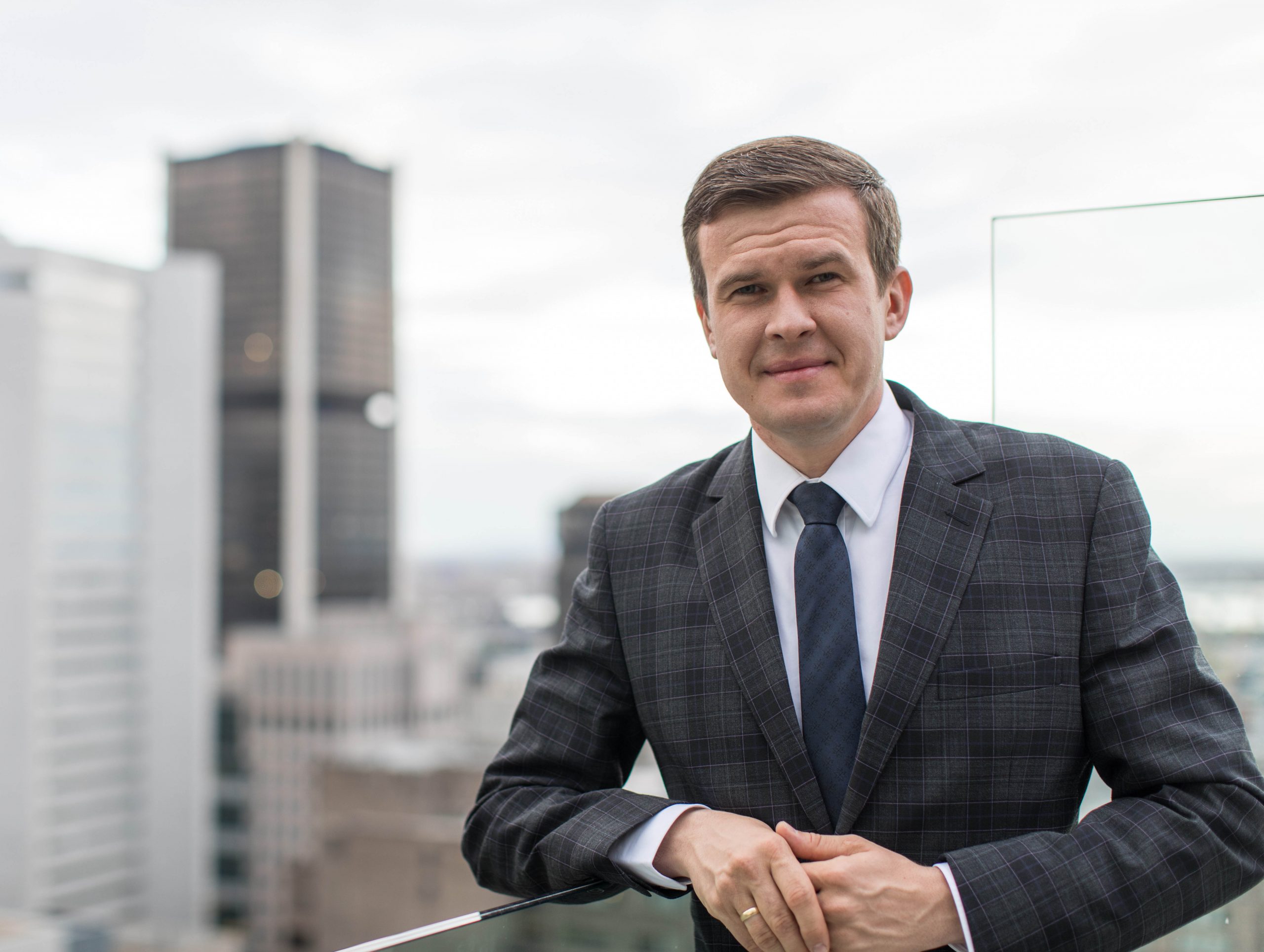 Witold Bańka began his new role as President of the World Anti-Doping Agency (WADA) on 1 January this year, and he took a deep understanding of the Agency into the position, having served as the European representative on WADA’s Executive Committee.

As an athlete, Mr. Bańka represented Poland as a 400-metre runner from 2005 to 2012, and after retiring he first worked in public relations before moving into politics as Minister of Sport and Tourism under two Polish prime ministers. Both his roles as athlete and Minister prepared him well, he says, for the rigours of his current position.

The WADA President recently spoke to the European Olympic Committees (EOC) about his first nine months in charge and the many challenges and opportunities he has encountered since, from convincing the private sector to contribute more financially to the fight against doping to the development of a strategic five-year plan and ensuring that athletes remain at the heart of everything WADA does.

The following is part one of a two-part interview, with part two scheduled for publication on 9 October.

Q: It is your first year as WADA President. How have you enjoyed the challenge so far?

A: When I entered the race for this position as a former athlete and lifelong lover of sports, I was ready to face the challenge. From the beginning, given the nature of the business, I knew that it would not be a quiet cruise but rather a ship sailing on the stormy sea and that has certainly been what has happened. It has been challenging but also very fulfilling as I lead an organisation that is really making a positive difference in the world.

WADA today is in a much stronger position than it was a few years ago. As regards Signatories to the World Anti-Doping Code, we now have a robust compliance monitoring program and related sanctioning tools based on new legal provisions. In this regard, we are much better equipped to identify non-compliance in the first place and then to deal with it effectively and proportionately. This is a big evolution. WADA is obviously not a perfect organization but only those who do nothing make no mistakes. We are moving forwards, constantly reforming and improving.

One of my priorities as the WADA President is also to increase funding for anti-doping. I would like to convince the private sector to contribute to the fight against doping in sport. Many sponsors, broadcasters and private companies spend their money on sport – so why can’t they contribute to the protection of clean sport?

One of those initiatives is the setting up of an Anti-Doping Solidarity Fund to collect money from the private sector and to invest in anti-doping capacity building worldwide. The goal is to raise the level of anti-doping in the countries and regions where resources are scarce. Encouragingly, we will shortly launch a pilot project in the field of anti-doping education with Polish companies contributing.

There are still many challenges ahead of us, especially in this difficult time of the pandemic. However, we do not intend to slow down our activities. Over the past few months, I have met virtually with many Government Ministers responsible for sport around the world, heads of international sport federations and athletes from across the globe, to discuss issues that are key to increasing the effectiveness of the fight for clean sport. I look forward to other opportunities to engage with all our stakeholders.

Q: From your perspective, how does being an ex-athlete help WADA’s relationship with current athletes?

A: As an athlete – and also as Polish Sports Minister – I always took the ideals of good sportsmanship to heart. I understand the importance of listening to the views of athletes worldwide and addressing the matters that are of most interest to them. They need to know their voices are being heard and I will always consult them on issues that affect them. That is why at the core of our new five-year Strategic Plan is a desire and commitment to ensure that our activities and priorities are athlete centred. The Agency will be looking for every opportunity to engage with them to further enhance the global anti-doping system.

Over the past months, I have met virtually with many of the athletes that sit on our Foundation Board, Executive Committee, Athlete Committee, and expert committees, as well as other athlete groups. I will continue this engagement and much more throughout my presidency.

I have also added a dedicated agenda item to do with athletes’ matters at each Executive Committee and Foundation Board meeting, in addition to the report by the Athlete Committee Chair. This will allow for better reporting to our stakeholders about initiatives being carried out in this regard.

I am doing this because I strongly believe that WADA exists for athletes, that we need athletes on board, and that we are accountable to them in carrying out our mission.

Q: What is your relationship with your Vice-President, Director-General, and the management team?

A: So far, so good. I have been impressed with WADA’s highly professional, international, and extremely committed staff, led by the Director General, Olivier Niggli, as well as many equally qualified volunteers within the Agency’s governance structure.

WADA Vice-President Yang Yang was a world-class athlete and double Olympic champion in short track speed skating. We have an excellent working relationship. It is really helpful that WADA is headed by two athletes, because we understand the needs of athletes and we are always at their service.

Q: How did your previous role as Minister of Sport and Tourism in the Polish government prepare you for life with WADA?

A: I have never avoided challenges. As Minister, I have made many difficult decisions and I have never been afraid to take responsibility. I have gained a tremendous amount of experience in terms of governmental work and management. I was responsible for an annual budget of around EUR250 million and a team of more than 200 employees.

The best thing about the former athlete who becomes Minister is that he always keeps the spirit of the athlete. As a Minister, I studied every reform from the athlete’s point of view. I wanted to solve the problem of young athletes who end their careers prematurely because they do not have financial resources and have to choose between study, work, and sport. So, I created the Team100 program, supported by state-owned companies. It is a unique dual career programme that today involves approximately 250 of the most talented young athletes, including athletes with disabilities.

This was a period of great change and reform in Polish sport, at many levels. In particular, I am especially proud of the Code of Good Governance for Polish Sports Associations with nearly 200 guidelines, which sports organizations must follow in order to obtain public funding. It was a difficult but much-needed project. I think the diplomacy and strategy required to be successful as a Sports Minister was good preparation for my work at WADA.

The biggest changes I made in Polish sport concerned the anti-doping system, so it is a world I knew well before joining WADA as President. As a former athlete I know that defeat hurts most when you lose to cheats. Therefore, I did my best to create an equal and fair environment for my colleagues, the athletes. As Minister, the athletes and the coaches were always my utmost priority. And that is exactly how I am as WADA President.

Q: How did the latest Executive Committee meeting go, and what major decisions were taken?

A: The latest Executive Committee meeting – the third of the year – took place on 14-15 September and I felt it was a very productive meeting. It was held virtually due to COVID-19 and it opened with a moment of silence in memory of former WADA President John Fahey, who died on 12 September in Australia at the age of 75. John served with distinction and enormous integrity as President from 2008-2013 and will be greatly missed by his colleagues and friends at WADA.

The Executive Committee then received updates on WADA’s progress in a number of areas and several key decisions were taken, including the approval of the  List of Prohibited Substances and Methods (List) for 2021. A full report from the meeting can be found in our media release of 15 September.

I was very encouraged by the level of engagement and solidarity that was expressed by Executive Committee members over the two days. Representatives both from Governments and the Sports Movement were united in emphasizing the importance to continue to strengthen WADA and to support it in the delivery of its mission in the service of athletes.

Members of the Executive Committee clearly reiterated their support for the current model of equal partnership between the Governments and Sports Movement that has proven to be successful since WADA was formed 21 years ago. In addition, members expressed their satisfaction with the nature and timing of the governance reforms that are being implemented, as well as the way forward for additional reforms to be made in the future.

As we continue to strengthen WADA’s governance, the Executive Committee is showing real leadership in ensuring the Agency is equipped to do its job effectively for clean sport around the world.

The second part of the interview will be published tomorrow, 9 October 2020.