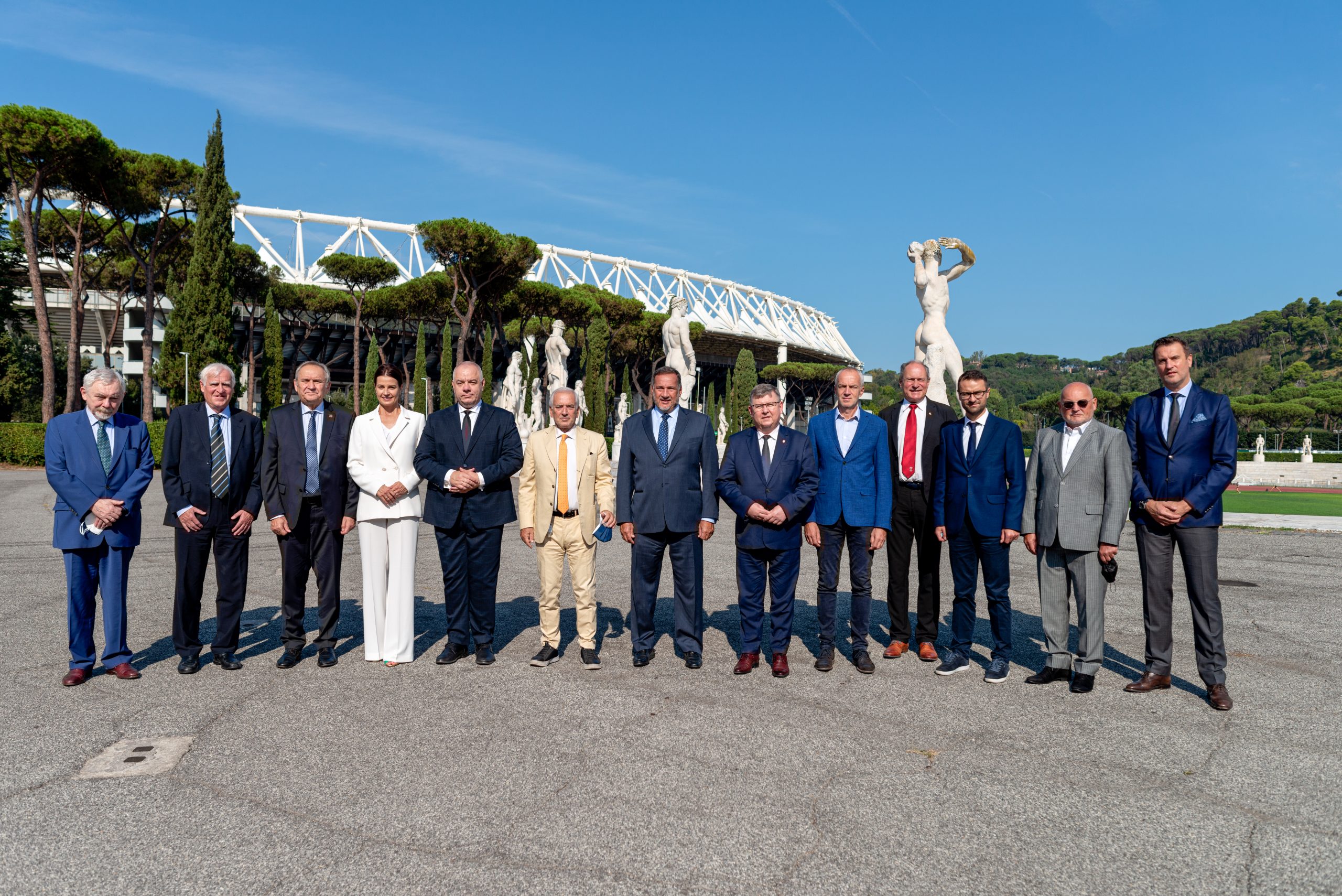 The European Olympic Committees (EOC) welcomed this weekend a delegation from Poland to the CONI headquarters in Rome for discussions on the 3rd edition of the European Games (EG), which are scheduled to take place in Krakow-Małopolska in summer 2023.

The meeting was led by EOC Acting President Niels Nygaard and Secretary General Raffaele Pagnozzi and attended by representatives of the Polish federal, regional and municipal governments, including Deputy Prime Minister and Minister of State Assets Jacek Sasin, Polish Minister of Sport Danuta Dmowska-Andrzejuk, Mayor of Kraków Jacek Majchrowski, and the Marshal of the Małopolska Region, Witold Kozłowski. A team from the Polish Olympic Committee headed by President Andrzej Krasnicki was also in attendance.

Discussions centred on preparations for the Games, the proposed sports programme, and the philosophy of the European Games, including potential opportunities for Poland, Krakow and the Małopolska Region.

“It was a highly productive meeting and we were very happy to see such a strong commitment from the Polish delegation,” said Acting President Nygaard. “It was a great start, we have worked as a team and reached concrete results, setting a precise roadmap for the future. We look forward to continuing ahead in the same spirit.”

Poland’s Deputy Prime Minister Jacek Sasin underlined how the European Games are a great occasion to promote the country: “The Polish government sees the economic and social opportunities related to the organisation of the EG 2023 in Kraków and Małopolska region.”

“As the plenipotentiary of the Polish government for the organisation of EG 2023, together with the Minister of Sport, I participated in a groundbreaking meeting with the EOC in Rome. I am pleased that we agreed jointly with all partners on the preliminary list of sports disciplines – this will allow specific investment plans to be made in the near future,” Sasin added.

Polish Minister of Sport Danuta Dmowska-Andrzejuk delivered a report on the sports programme proposed by the Ministry of Sport in cooperation with the NOC of Poland, the Municipality of Krakow and the Małopolska Region.

The two sides agreed on a preliminary list of 23 sports for the Games, subject to final negotiations with each of the European and International sports federations. A key criterium for selection was whether the sports will use the European Games as their continental championships and/or offer qualification for the Olympic Games Paris 2024.

The meeting in Rome followed a recent three-day EOC inspection visit to the Polish hosts from 30 July-1 August.

“The presence in Rome of such a high-level delegation underscores the importance that your country and your government give to the organisation of the European Games,” EOC Secretary General Pagnozzi told the Polish delegation.

EOC Coordination Commission Chair for Krakow-Małopolska 2023 Hasan Arat, who attended the meeting remotely due to travel restrictions, stressed that the EOC has many reasons to be happy that the European Games will take place in Poland and that the organisation of the event will also be a great opportunity for the country.

“The social benefits and the legacy for your nation from organising such an event can be huge,” he said. “For each host country, the European Games are an opportunity to engage with its citizens, to motivate volunteers, to inspire young people, to promote healthy lifestyles and to foster social inclusion.”

Polish NOC President Krasnicki said that he was very pleased with the discussions and outcomes of the meeting. “It was a very fruitful meeting during which many issues related to the organisation of Games were addressed,” he said. “There is common awareness on the importance of this event and determination to conclude all necessary decisions as soon as possible.

“I am sure that by having the support from the Polish government with effective cooperation between the City of Krakow and the authorities from the Małopolska Region, we will be able to organise a great sport event in Poland in 2023.”

EOC Executive Board Member Zlatko Mateša provided context on the history and philosophy of the European Games, retracing the highlights of the continental Games from Baku 2015 to Minsk 2019.

“It is a project of mutual benefit. The key word from our side is flexibility,” said Mateša, who also underlined the social benefits and legacies host nations can expect from organising such an event. “We don’t want you to build any extra infrastructure unless you will need it for future use. We are promoting a polycentric approach, with the involvement of many cities.

“Please be assured that all the above can be gained without spending too much. Following the adoption of Olympic Agenda 2020, sustainability is a working principle for us. The Games, with the participation from 50 European countries, will strengthen the position of Poland also at the European Union level, improving its diplomatic channels.”

Click here to watch a video on the European Games that was shown to the participants.

Spyros Capralos, IOC Member and CoCom Chair both for the Baku 2015 and Minsk 2019 European Games, emphasised that the European Games are an integral part of the Olympic journey and “the inclusion of new sports in the programme will be an asset for the Games and for Poland.”

The proposal of summer ski jumping, which is very popular in Poland, is an absolute novelty for the Games.

The full list of EOC and Polish Olympic Committee representatives was as follows: