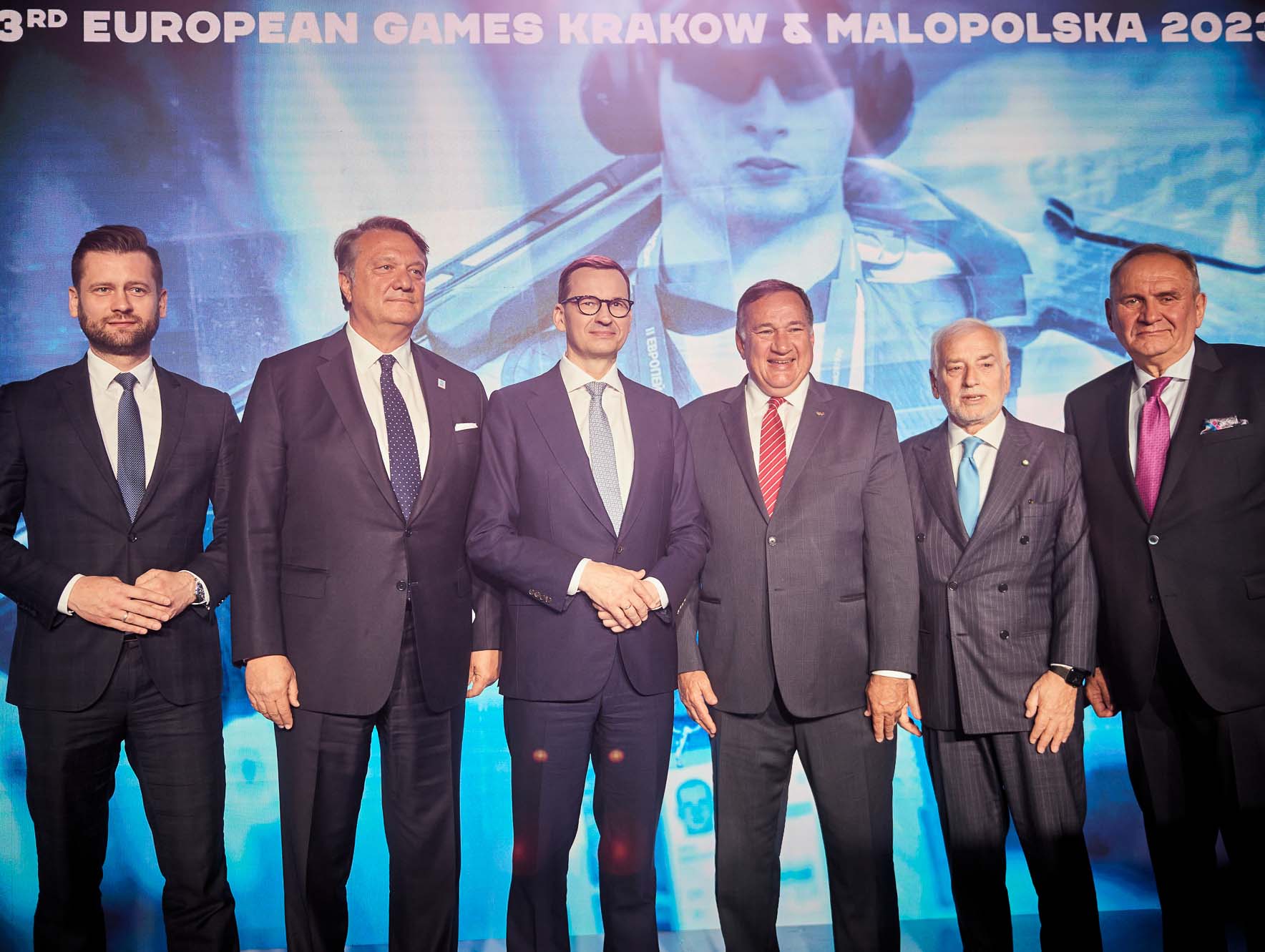 The European Olympic Committees (EOC) have set the blueprint for a low-cost and sustainable future for the European Games after signing the Host City Region Contract (HCRC) for the 2023 edition with the City of Krakow, the Malopolska Region, the Polish Olympic Committee, and the local Organising Committee.

An EOC delegation led by President Spyros Capralos, and including Secretary General Raffaele Pagnozzi, and Executive Committee (ExCo) member and European Games Coordination Commission Chair Hasan Arat, travelled to the Polish Olympic Committee (POC) Headquarters in Warsaw, Poland on 17 May 2022. They met with Mateusz Jakub Morawiecki, Prime Minister of Poland, Prof. Jacek Majchrowski, Mayor of the City of Krakow, Witold Kozłowski, Marshal of the Malopolska Region, Andrzej Kraśnicki and Adam Krzesiński, the President and Secretary General of the Polish Olympic Committee (POC), and Marcin Nowak, Chairman of the European Games 2023 Organising Committee, to finalise and sign the HCRC.

This major milestone follows a commitment of funding towards the event from the Polish Government, as well as support from the European Union (EU).

“We are thrilled to reach this important milestone and set the blueprint for the future of Europe’s premier multisport event. As with all major events there are challenges, but working with our partners in Poland makes this journey easier and all the more worthwhile. Poland is a natural fit to host this event due to the country’s incredible sporting history, but also because the people are an embodiment of the values the EOC and the European Games seek to promote. The way Poland has welcomed and supported millions of Ukrainian refugees is the epitome of solidarity. With the support of the EU, and with Europe coming together through sport, the European Games will demonstrate that our continent is united, and that sport has an integral role to play in the continuation of this reality.”

Minister of Sport and Tourism Kamil Bortniczuk said: “As a government party, we have completed the operation of securing funds in the budget that allow for the implementation of the necessary investments in both the field of sport and infrastructure. We allocated PLN 250 million to sports investments only. I am glad that next year we will host the best European athletes in Poland. I invite fans from all over Europe to Krakow and Malopolska. The 3rd European Games will be a professionally prepared and, above all, a very safe event. This is a great opportunity to visit the city of Krakow and the beautiful and hospitable regions of southern Poland. I invite you not only for sports emotions, but also for unique tourist experiences.”

70% of sports programme to be Olympic qualifiers

There are 26 sports on the programme, including 18 Olympic sports (Appendix 1) serving as qualification events for the Olympic Games Paris 2024. Meanwhile, 8 Olympic sports will be holding European Championships as part of the Games, including the European Athletics Team Championships, meaning that the event will feature the continent’s best Olympic athletes. In addition to this, fast-growing and youth-focused sports will bring a dynamic edge to the European Games for the first time.

The result of the above is that the European Games will have the best calibre of athletes and the most exciting sports programme since the first edition in 2015, whilst creating a sustainable framework for future host cities.

EOC Secretary General Raffaele Pagnozzi said: “As part of the development of the future roadmap of the EOC, we undertook a wide-ranging NOC consultation. NOCs made it clear that an exciting, commercially appealing, and sustainable European Games was central to our future. To achieve this, the consensus was that the best Olympic athletes had to compete and the way to do this was by collaborating with International and European Federations to make the events Olympic qualifiers. Combining this with up and coming sports, that will help us engage with new audiences, will make for a truly spectacular European Games.”

Mayor of the City of Krakow,Jacek Majchrowski explained how, “Thanks to the multi-million Polish government support, important repairs and modernisation of roads, tracks, pavements, and the construction of bicycle paths will be carried out. Additionally, the condition of several sports facilities in the city will be improved. Thanks to these investments, the people of Krakow will be able to use modern and friendly infrastructure for the next decades.”

Marshal of the Malopolska Region Witold Kozłowski added, “One of the most important sports events of the next year is ahead of us. I am glad that the best European athletes will compete for the highest trophies in various cities of Malopolska and other regions. Thanks to this, fans will have the opportunity to visit not only Krakow, but also other beautiful parts of the region.”

European Games Coordination Commission Chair Hasan Arat agreed that the 2023 edition in Poland will leave a great legacy in Poland:

“Frederic Chopin’s legacy to Poland is huge from music to general philosophy. The legacy of the Games is the youth of Poland and Europe. The future Polish and European citizens. Both Krakow and Malopolska have a great university culture. One of the oldest universities in Europe is in Krakow. The university students and volunteers will be the engine of our Games! Chopin used to say that simplicity is the highest goal, achievable when you overcome all difficulties. Good luck!”

POC President Andrzej Kraśnicki, who is also an EOC ExCo Member, outlined his excitement for the Games, saying:

“The European Games 2023 will be an excellent showcase of the growth and opportunity in Poland, as well as the spirit and dynamism of the next generation, which will be brought to life by through our volunteer programme. I want to thank the EOC and of course all our partners here in Poland, who have been key to our progress to date. Let’s continue our great collaboration in the months ahead and deliver an amazing event for Europe.”

The European Games is set to take place in Kraków and the regions of Małopolska and Śląsk in Poland from 21 June – 2 July 2023.