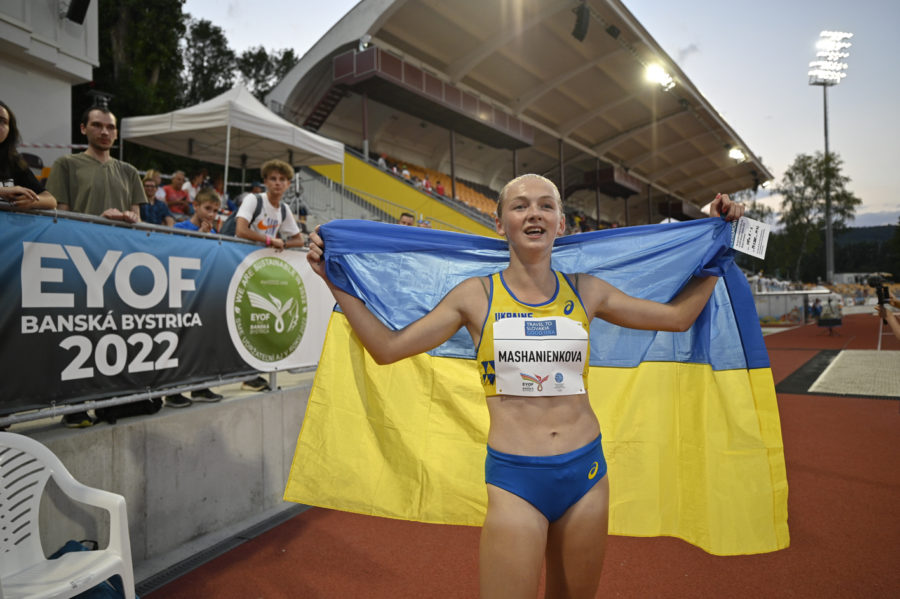 Ukraine picked up its fourth gold medal of the European Youth Olympic Festival (EYOF) Banská Bystrica 2022 thanks to a record-breaking performance from Olha Mashanienkova in the girls 400m hurdles final at the Athletics Sports Park Stadium.

Mashanienkova set a new personal best time after clocking in at 59.49 to seal the gold medal ahead of Romanian Stefania Uta and Amelia Zochniak from Poland, who won silver and bronze respectively. Just over 0.4 seconds separated the three talented young athletes who left everything on the track in a back-and-forth race.

Speaking in an interview after the medal ceremony, Mashanienkova explained how the support of her teammates carried her to the finish line and expressed how much it meant to her to represent her country at such a challenging time.

What does it mean to you to get a gold medal at your first ever EYOF event?

“It means a lot to me, because I had the chance to fight for such an important title at a major event. It is a great honour for me to represent my country, especially in such a difficult time for my nation.”

It was a very close race, what made the difference for you to come out on top?

“In the second half of the race, I felt that I still had strength and could compete. In the last 100 meters I heard my team supporting me from the stands, and this gave me even more strength to go on and win the race.”

How did you feel when you looked up and saw that you won?

“I was very satisfied because I did not even imagine that I could perform that well! Also, I was
extremely happy to bring a medal back to my country, thus contributing to my nation&#39;s medal
count.”

Do you plan to compete professionally in the hurdles?
“I hope to continue training for the hurdles because I really like this distance and I want to continue to perform to a high standard. I don’t really like to plan or think in advance because there are different days, both good and bad.”

The final day of the EYOF takes place tomorrow, where medals with be awarded for the first time in the basketball and volleyball competitions, as well as many others. You can follow all the action on the EOC social channels, and via the livestream of events on the EOC Channel!