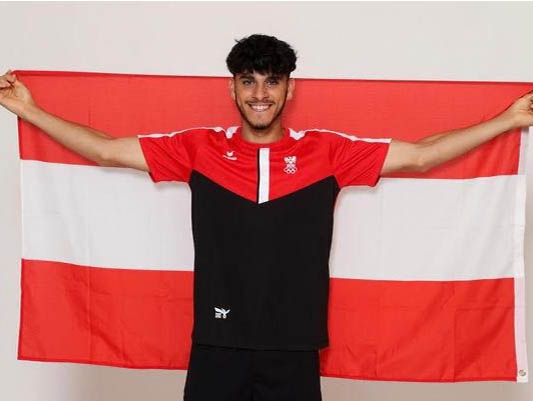 Syrian-born athlete Molham Hawana moved to Austria as refugee at a young age, where his bravery, determination, and passion has seen him makes incredible strides in education and in the pursuit of his dream of one day competing at the Olympic Games.

Hawana has become fluent in German and continuously works on his excellent English skills. He has already achieved a lot at a young age, but he believes there is more to come and is ready to display his skills here in Banská Bystrica at the European Youth Olympic Festival (EYOF).

Hawana began his athletics career competing in the decathlon, but after throwing the javelin for the first time, he knew that was the discipline he wanted to focus on: “When I throw it well, it flows perfectly, and it gives me a lot of satisfaction. This feeling makes me want to do it repeatedly,” Hawana said during an interview when asked why it was his favourite discipline.

He is competing under the EOC flag, but as part of Team Austria, which is providing him with the platform to reach for his dreams. The EOC caught up with Hawana here in the Slovakian city, as he prepares to compete with his fellow future stars!

You mentioned that this is your first experience at EYOF, what does it mean to you to have the opportunity to perform at this event?

“It means a lot to me because you get to meet people from different countries all over Europe. It is a new experience, as I am not used to staying in an Athletes’ Village with so many people in one location. This is special to me, and it increases my desire to perform well. Also, the organisation of the event has really impressed me.”

What does the support of Team Austria and the EOC mean to you?

“Without the support of the EOC and Team Austria I would not be here, I am thankful to them for giving me this opportunity to perform at a major event. The Austrian team is the best place I could be, it is my second home. I can now speak German better than Arabic, which is my native language. They have taken care of me and have allowed me to chase my goals.”

Is competing professionally in javelin where you see yourself in the future?

“Yes, it is my favourite discipline and I hope I can participate in javelin competitions for many years to come.”

Can you tell us more about your experiences in Syria?

“Living in Syria was difficult. Food was hard to come by and everyday felt uncertain. Part of the reason I fell in love with javelin is because every day my friends and I used to compete against each other to see how far we could throw stones. I believe this is why I have the ability to throw the javelin well, because I use my “stone arm”. I got a lot of practice at a young age!”

Is your long-term goal to compete at the Olympic Games?

“This is what I am continuously working towards with my coaches. My dream is to compete at the Olympic Games Los Angeles 2028. It would mean everything to me.”

You can stay up to date with all the action at EYOF Banská Bystrica 2022 via the EOC social channels as well as watch Hawana compete in the javelin competition this Friday via the livestream of events on the EOC Channel!