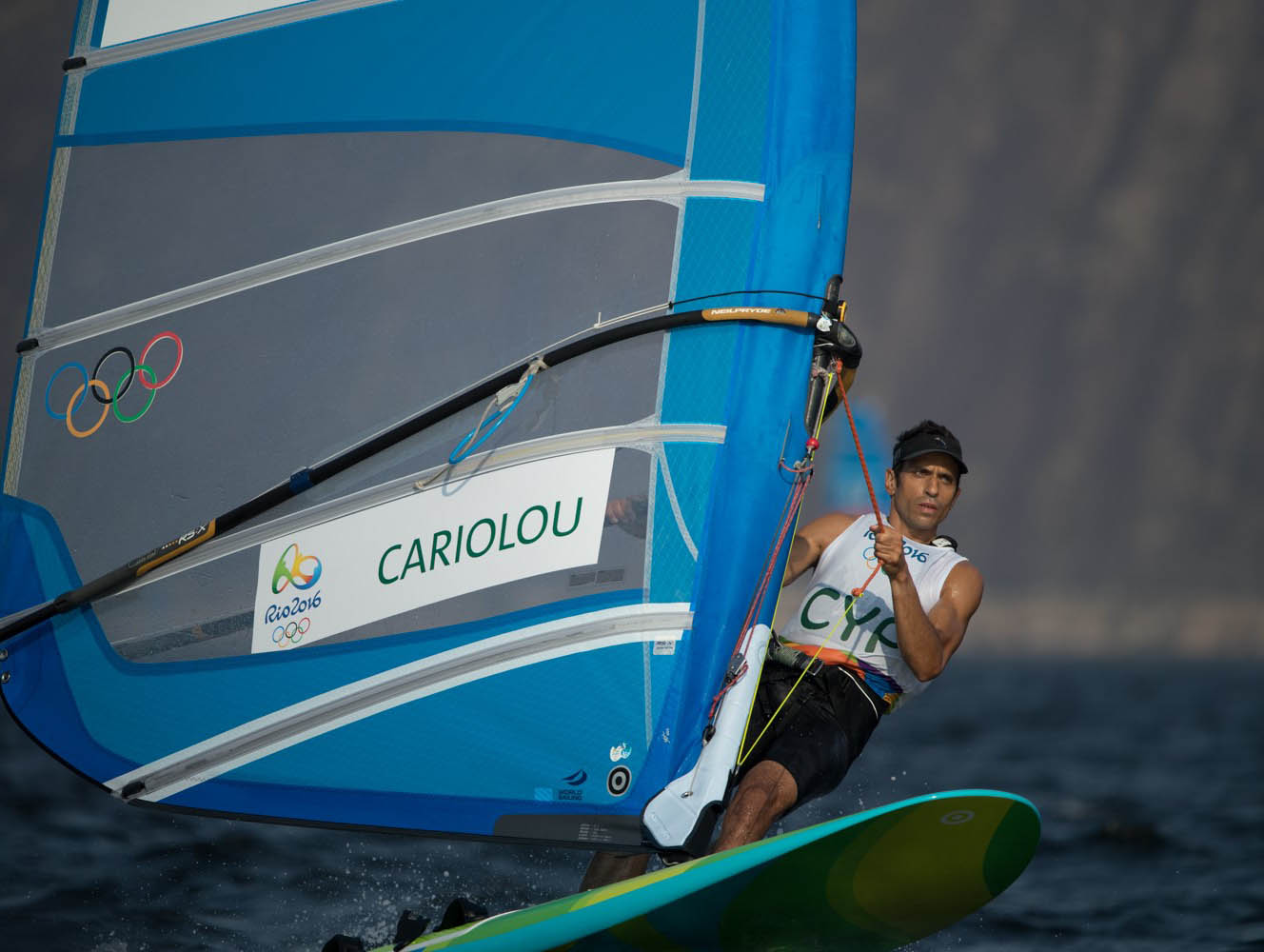 ROAD TO TOKYO: FROM HUMBLE BEGINNINGS TO LIFE AS WINDSURFING KING OF CYPRUS

Andreas Cariolou is on course to join an illustrious group of athletes that have competed in five Olympic Games and, having already secured his place at the Olympic Games Tokyo 2020, he is also poised to become the first Cypriot athlete to accomplish the feat.

The windsurfer qualified for Tokyo 2020 at the Torbole 2019 RS:X World Championships that took place on Lake Garda in northern Italy last September, meaning Cariolou will add Tokyo 2020 to a run of five-consecutive Olympics that began at Athens 2004.

“In 2018, I was competing without a steady coach and I was really close to qualifying but missed it by a small margin,” he said. “So, in 2019 after preparing with my coach Yiannis Sarris better than I did in 2018, I was going to the World Championships to do my best, believing that getting the qualification would be just a formality.

“I was wrong. I had a tough event, and it was a real fight to make it happen. In the end I was not happy with my performance in the event, so I had mixed feelings even though I managed to secure a place for Cyprus at the Tokyo Olympics.

“The sailing competition [in Tokyo] will take place in Enoshima and it is a special place for sure. Currents, big waves, big winds, and intense heat are all in the plan for next year. I have been there twice for training and competitions and it can produce all kinds of different conditions.

“I believe you need to approach this event prepared for all weather possibilities.”

Cariolou’s family became refugees in southern Cyprus after they were forced to flee their home in Kyrenia following the 1974 Turkish invasion in Northern Cyprus.

His family has a long history of sailing and diving, so the 37-year-old is not surprised he made his name on the water.

However, Cariolou’s sporting run may not have begun if he not had his curiosity piqued after finding an old windsurfing board in his grandmother’s back yard.

And while he managed to persuade his father to take him and his sister to the beach to try windsurfing, Cariolou was not an instant success on the board.

“I was very skinny then and had no muscle on me,” he said. “My sister, two years older than me, managed to lift the sail from the water and get going while I struggled with no success. I wanted to try it so bad that I was working out the whole following winter just to make sure I would be able to do it the following year.

“My progress was very slow as I didn’t have a proper windsurfing coach for years, and I vividly remember that besides a few lessons from my father, I was learning from a book titled ‘Learn to Windsurf in a Weekend.’

“I was 17 years old when I started dreaming of going to the Olympics. After four years, in 2003 my dreams became a reality when I become the first sailor in Cyprus history to earn qualification for the Olympics. I finished in 13th place at the World Championships in Cadiz, Spain and so I went to Athens 2004.”

Much has changed since Cariolou made his competitive debut at the Athens 1999 Euro Olympic Week. Boards have improved and athletes are fitter, and he has had to alter his training schedule to help him extend his career.

After a first taste of international competition, he returned to the Greek capital in 2004, where he finished 13th in his Olympic debut.

“I was quite inexperienced then,” he said. “I will always remember a race with a typical southern wind on the Saronic Gulf, where I found myself leading the race. I held on for half the race and was looking good, until an equipment problem occurred.

“I still managed third in that particular race and although I was disappointed to have the equipment failure, it was an incredible feeling battling with the top guys for the race win in my first Olympics.”

Looking forward, Tokyo 2020’s postponement as a result of the COVID-19 pandemic means Cariolou will have an extra year to prepare for his fifth Olympics.

Once it concludes, Cariolou will face the decision of whether he wants to carry on to Paris 2024.

“After every single Olympiad, I took my time to reflect on how I feel about my career and whether I had it in me to push it for four more years or not. So far, the final answer has been yes, so here I am on my way to my fifth Olympic Games,” he said.

“I am as motivated as ever. I do not know if these are going to be my last Games, but I am treating them as if they are and I will refuse to settle for anything less than my best.

“I never planned to set a record. Continuing was a decision I took every four years, when each Olympiad was over. There are times it seems unbearable to keep it up, but I consider myself blessed to be able to chase my dream.”