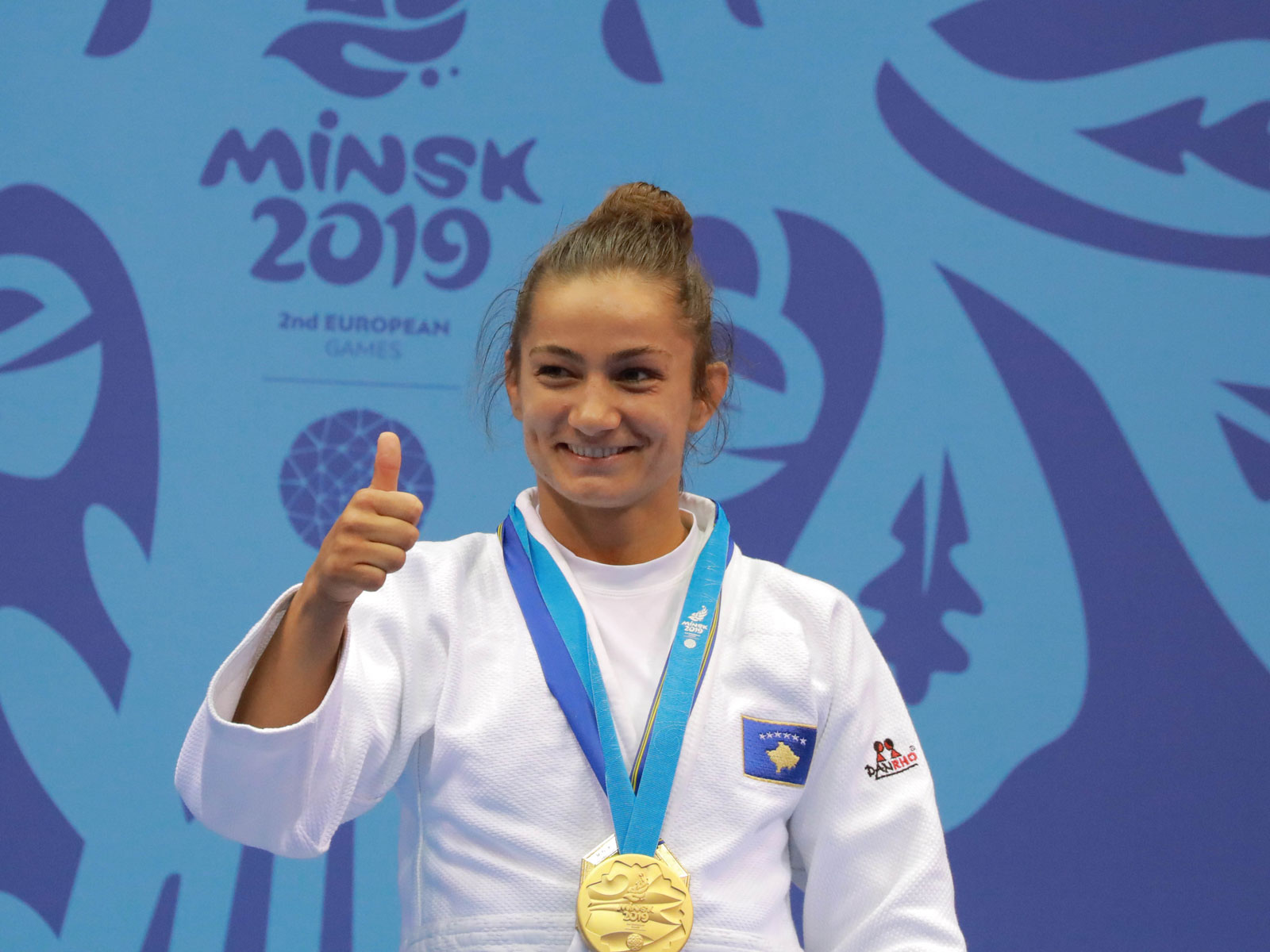 World No. 1 judoka Majlinda Kelmendi of Kosovo is back on the mat following a year away from competition recovering from back and knee injuries. She spoke to the EOC about her fantastic return to medal-winning form at the European Games Minsk 2019, where she won gold in the under -52kg category on Saturday.

Kosovan legend Majlinda Kelmendi was an unbeatable force in the world of judo until severe injury forced her onto the sidelines following the Olympic Games Rio 2016, where she became the first Kosovar athlete to win an Olympic (gold) medal.

Having not fought in a championship since 2017, she was hungry to be victorious in Minsk this year, and her determination definitely paid off.

“It was a long, tough day, but I just wanted to win and show that I’m back,” said Kelmendi, who was crowned European Games champion with a victory over Baku 2015 bronze medallist Natalia Kuziutina of Russia on 22 June at the Chizhovka Arena.

“Honestly, it was not easy at all, but in the end I won the gold, and it’s the first medal for me at the European Games,” she added.

Getting back in the game after a physical setback was not easy, she confided, referring to the mental pressure she was under. “You can get healthy and strong, but if you’re not healthy in your head, it’s even harder.”

Kelmendi, who was injured during the inaugural European Games in Baku, was excited to be competing at Minsk 2019, and the crowd did not disappoint, cheering on Kosovo’s most beloved athlete with every throw.

“We had a lot of people here supporting me and my teammates,” the 28-year-old said. “It was a good atmosphere, and we could feel their support. I am happy I did not disappoint them.”

Since winning gold as an 18 year old at the 2009 World Junior Championships in Paris, Kelmendi’s career took off astronomically, winning two World Championships, four European Championships and countless other medals en route to becoming Olympic champion in 2016. But getting to where she is now wasn’t all plain sailing.

“I had many problems during my career. Many things and people that tried to stop me. When you are successful, not everybody likes you, not everybody supports you,” she said. “There will always be somebody who will try to ruin your reputation, so it was not easy, but I am happy with what I have achieved.”

Kosovo’s biggest sporting icon started practicing judo at 8 years old in her hometown of Peja, right after the Kosovo war had ended. Practicing judo helped her to “become somebody,” and gave her the opportunity to support her parents, who lost their jobs after the negative effects of the war led to a closing of factories in the country.

Kelmendi’s triumphant success has turned judo into the most popular individual sport in Kosovo, which is in no small part thanks to her mentor and coach Driton Kuka. Kuka was one of the most promising judo talents in his country when he was a teenager, but the Yugoslav war forced him to end his own sporting career at just 19 years old.

His athletic ambition was instilled into Kelmendi, who, since becoming the first Kosovar Olympic champion, is seen as a heroine in her country. For this reason, she strives to be a role model for aspiring athletes, encouraging them to aim high in the sporting world.

“Starting in a small city, I have now become the best in the world,” she said. “So if you want something, you have to work really hard for it, and believe in yourself. That’s all I did, and it brought me to where I am today.”

Staying disciplined is part of being a successful sportswoman, but even the world’s most accomplished athlete needs a word of encouragement from time to time. “[People] think because you are an Olympian, you don’t need it, but honestly, I need it. If you are good, sometimes you need to hear that you are strong, and that you can do it.”

To ensure that she brings the right mindset to the mat, Kelmendi tries to stay positive and acknowledge the hard work she’s put into her achievements. “All I think about [before the fight] is that I’m the best, and I work really hard, that I am strong enough, and that I can do it.”

After a successful outcome at this year’s European Games, the two-time world champion would like nothing more than to get some deserved rest, but a holiday is unfortunately not on the horizon.

“I can relax [for a couple of days], but then I have to train again. In three weeks, I am competing at the Budapest Grand Prix 2019, but the main goal for this year will be the World Judo Championships in Tokyo this August. I hope – and I believe – that I will be in great shape,” she said.

After the World Championships are over, Kelmendi is ready to start her training for the Olympic Games Tokyo 2020, proving that her drive to retain her crown as the world’s most fearless and deserving champion knows no bounds.