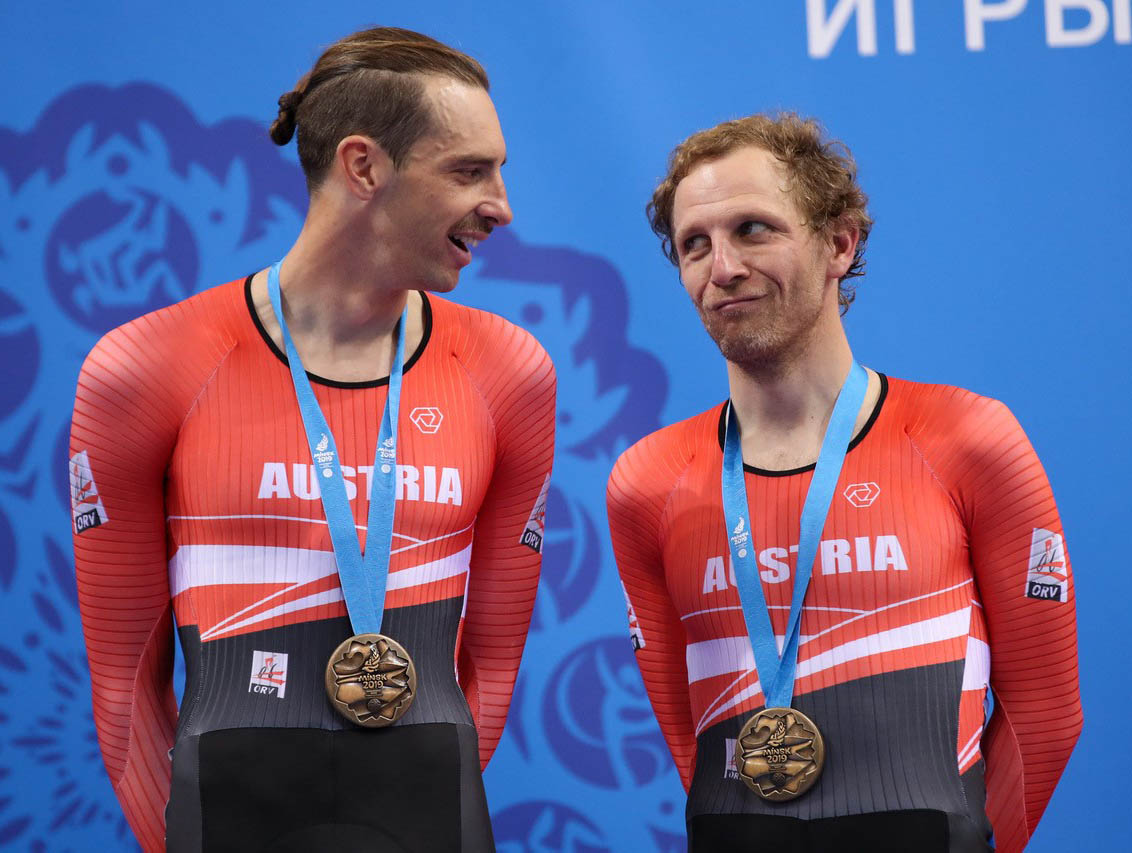 With the Olympic Games Tokyo 2020 already postponed by a year, speculation over whether they will or won’t take place this summer has become the latest unwanted distraction for athletes preparing to compete on the world’s biggest stage.

Which is why Austrian track cyclists Andreas Graf and Andreas Müller, who qualified for Tokyo 2020 last March, are avoiding news of the Games altogether.

“When you’re an athlete, you don’t have much energy to waste on worrying whether there will be the Olympics or there won’t be the Olympics. It’s better to focus on training,” Graf says, adding that he and Müller agreed on their media blackout back in September.

“We both came to the conclusion that we are not listening anymore to the news, what’s coming from the newspapers or from the IOC. Our focus is on the Olympic Games, they’re on the exact same dates, only one year later,” he continues. “The 7th of August 2021, it’s our day, and the one that we have to bring our best and be in our best shape.”

Teammates since 2008, the two Andreas’ came by the opportunity to take part in the Olympic Games somewhat serendipitously. That’s because Graf and Müller compete in the endurance event known as The Madison, which was removed from the sports programme of the Olympic Games following Beijing 2008 and only reinstated in 2017 – with a women’s 30km race joining the men’s 50km for the first time.

Tuning out the noise and focusing on the task at hand is therefore an understandable course of action, especially considering that Graf and Müller are now 35 and 41 years old, respectively. It stands to reason that their first appearance at the Olympic Games is also likely to be their last, with Müller, who became coach of the Austrian national team three years ago, already eyeing a gentler pace of life post-Tokyo 2020.

“As everybody knows, I’m not the youngest athlete anymore,” Müller says with a laugh. “I was already preparing, not to directly retire from my career, but just to take it easy, do some nice races and not too much stress. I was already happy with this plan.

“And then there was the announcement that [the Madison] was being put back on the Olympic programme. It took me some weeks to decide. Everybody wants to go to the Olympics but in the end, it’s a lot of hard work. Finally we decided: ‘Yeah let’s do it.’ And I’m more than happy that it worked out in the end.”

The qualification process for Tokyo 2020 stretched over two years, with the pair booking their place at the Games during the final qualifying race last spring in Berlin.

Having waited the better part of four decades to qualify for their first Olympic Games, the duo was then hit with more unexpected news when Tokyo 2020 was postponed by a year due to the pandemic. Like athletes everywhere, Graf and Müller soon experienced significant disruption to their training regime, which required a fair amount of ingenuity to overcome.

One of the biggest adjustments was dealing with a sudden lack of training options. With so many travel restrictions in place, going to warmer, drier climes is not currently an option for the Austrian cyclists, resulting in a move indoors.

“During Austrian winters we have really cold temperatures and snow everywhere,” Graf says. “For a long time we were not allowed to go anywhere in the south for training, so we changed our training a lot to eSports. We’re doing indoor now. We have almost three months training alone. And that’s a huge difference, especially mentally because if you train alone, it’s not the same as training with your partner and it’s much harder work to stay at the world elite level.”

Pre-pandemic, one experience the riders say they benefitted a great deal from was competing at the European Games Minsk 2019, where they won bronze in The Madison.

“It was really, really cool, because it’s a mini-Olympics with a big Athletes’ Village,” Müller says of the atmosphere at the European Games. “And you definitely feel the Olympic spirit because in most cycling events – and other big sports event, too –  you just see your sport, so you don’t see volleyball, you don’t see track and field, etc. In Minsk it was a big mix of everybody, of all kinds of sportsmen and sportswomen.”

Graf says it was also an excellent opportunity to fine-tune their tactics for Tokyo: “The European Games were a good chance for us to try something new in preparation for a big event, because it was almost on the same dates as the Olympics. So we tried to prepare everything like we want to do for Tokyo. And yeah, with the medal, we saw that we were in a good way. Everything worked how we wanted and now we know what we have to do for Tokyo.”

Looking ahead, Graf and Müller harbour no illusions of becoming Olympic champions this summer. But they agree that should everything fall into place, a top-five finish (perhaps even on the podium) is not entirely out of the realm of possibilities.

“Our expectation is that we go there in our best shape ever,” says Graf, who cites the longevity and familiarity of working with Müller as the pair’s biggest strength. “Our goal is to reach the top five, and if we have the perfect day and conditions it is a realistic target.”

For the record, the two Andreas’ are both optimistic that the Games will take place this summer in some shape or form. Müller, for one, thinks the world needs the Games to happen as much as the athletes do.

“It’s a really good thing for the people in the world. It raises the mood, brings an optimistic perspective for the future,” Müller says. “Sports have always been a kind of motivation, it’s not only about people riding faster or running faster and jumping higher. It’s also about getting a good spiritual reward. And I think that this will be the topic of these Games and I think that’s a really good thing.”

He goes on to say that with coronavirus restrictions likely to still be in place this summer, it means people will have more time on their hands to follow the action, be it on TV or online, providing an excellent opportunity for the Olympic spirit to work its magic.

“In my opinion, it’s a big chance for us, for sport, for the IOC – it will be a special Olympic Games this time,” he says. “People need good news.”